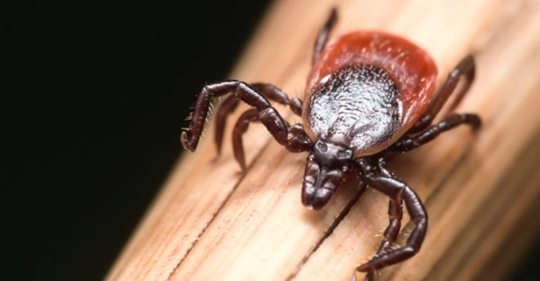 This article is courtesy of MDLinx:

Armand Desormeaux, of Hampton, NJ, was an active 80-year-old—until he developed a fever in early May 2019. Then he began to experience tremors and was unable to verbalize. Desormeaux died in the hospital 10 days later. What caused such a tragic condition in an otherwise healthy man? It was an uncommon virus from the bite of a tiny tick, the New Jersey Department of Health confirmed.

The rare but deadly Powassan virus is carried by the deer tick—the same tick that causes Lyme disease infection.

The rare but deadly Powassan virus is carried by the deer tick—the same tick that causes Lyme disease infection.

It’s a rare but deadly pathogen known as the Powassan virus, and it’s spread by the deer tick (Ixodes scapularis, aka the black-legged tick)—the same tick that infects people with Lyme disease. But unlike Lyme disease, there’s no effective treatment for the devastating Powassan virus. It’s fatal in 15% of people who are infected. Of those who survive, 50% end up with permanent neurological damage.

Infections have been rare, but they’re becoming more common.

“There has been an important change in the ecology of Powassan virus in that the deer tick has recently become infected with the virus. Until a few decades ago, it was only transmitted by a tick species [Ixodes cookei, aka the groundhog tick] that does not commonly bite humans and human cases were extremely rare,” explained Durland Fish, PhD, professor emeritus of Epidemiology, Yale School of Public Health, New Haven, CT. “This recent change in the ecology of Powassan virus has caused concern within the public health community.”

Because deer ticks are now able to infect humans with the virus, more cases are being reported in areas where they haven’t occurred before. “As the geographic range of Lyme disease expands, so will Powassan,” Dr. Fish predicted.

“There are currently no practical methods to control the spread of deer ticks or Lyme disease, and this is also true for Powassan virus,” Dr. Fish said. “Nothing can be done to prevent it from expanding into new areas, and human cases are expected to increase as more people become exposed to infected ticks.”

Unlike Lyme disease, Powassan infection has no telltale bullseye rash at the site of the tick bite. Fortunately, most people who are infected never show any symptoms. But for those who do, the incubation period is quick, and symptoms usually develop within a few days to about a week or so after the tick bite.

The most common symptoms are fever and headache. Others include vomiting, weakness, confusion, loss of coordination, speech difficulties, and seizures. In more serious cases, Powassan can cause potentially fatal encephalitis and meningitis.

The virus cannot be transmitted from one human to another.

Healthcare workers are required to report all cases to the local health authority. (For more information on testing and reporting Powassan virus, see the CDC website.)

There is no vaccine to prevent the virus and no specific remedy for it. Treatment is generally supportive and often involves hospitalization for serious cases.

Currently, the best “cure” is an ounce of prevention, according to the CDC. Simply put, stay away from ticks.

“As more ticks become infected with Powassan virus and more people become exposed to them, Powassan could become epidemic like Lyme disease,” Dr. Fish warned. “Because it can be a serious disease, causing fatalities, and [because] there is no treatment for it, Powassan has the potential to become a greater public health threat than Lyme disease.”